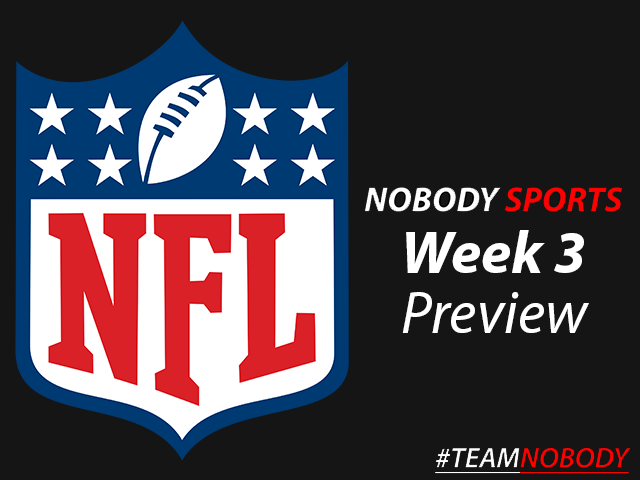 Alright sports fans! We here at Nobody Sports have decided to put our collective minds together and bring you a preview of the week ahead in the NFL. Joe, Mike, Miz and Johnny bring you their picks for the week three slate of games. They also give a few picks for all you degenerate gamblers out there looking for a little more action to add to your slips this week. So buckle in and let’s dive right into the NFL Preview Week 3 edition.

Game of the Week:

Mike: NO at ATL

Two explosive offenses and two below average defenses should make this divisional showdown a fun game to watch.

The fourth highest scoring team in the league with enter Carolina and continue its offensive dominantion. I see it as a close game going into the half but Cincy depth in offense will take over in 2nd half. With Mixon out i see Tyler Boyd, Tyler Eifert having a big game. McCaffrey will have a big game for Carolina but it won’t be enough offense for a comeback.

Carson Wentz is back! What more is there to say. The ‘should-have-been’ MVP returns to an Eagles offense desparately in need of its Leader. The Colts defense ranks 26th in picks and sacks AND has to play on the road. I’m feeling good about Wentz picking back up where he left off.

Chess match between the two LA teams and two of the best young running backs in the league. Both back eclispe the 100 yard mark and score a touchdown. However, in the end Goff will outduel Rivers and find Brandin Cooks for the game winning touchdown in the final minute of the game.