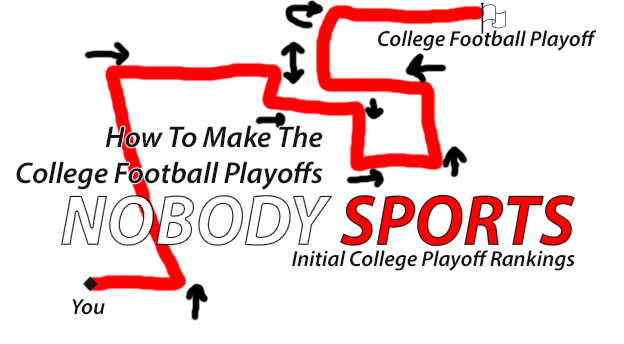 On Tuesday night, the College Football Playoff Committee released their initial rankings for the 2017 season. While these are only initial rankings, the position your team starts out at on this initial list could go a long way to determine where you sit come seasons end. Tonight we’re going to breakdown why (and why not) your team will be playing in the playoff come seasons end.

But really, say never. Okay, so here are the teams that are probably just happy to in the rankings right now. Nothing against these teams, but they need all of the unbeatens to fall and then the top 10 teams to essentially play the first 22 people that walk into the stadium. Now realistically this is college football, and anything could happen over the next month or so, but these teams should prepare to play one more fun game come Bowl season, have a parade, enjoy a warm host city, and relish in the fact that they aren’t the Baylor Bears.

For the most part, these teams haven’t really surprised anyone. But these teams need a lot of help to get a sniff of playoff football. That being said, these teams could very well be the reason for a lot of discussion by the Committee if they all run the table. And to be honest, I would love to see it, because who doesn’t love a little chaos.

Time To Get Real…

Hey….shhhhhh, don’t pay attention to them. They’re not the reason we’re here. I’m here for you guys. You’re the real deal. What? No, I wasn’t looking at Virginia Tech. She doesn’t do anything for me like you guys do. You want reasons, I’ll give you reasons.

You run the table and play Alabama in the SEC championship game. It’s really that simple. The road to the playoff is relatively simple for Jake Fromm and the Dawgs. Two wins over Top 25 teams put you in this position. All you have to do is finish. If the dominoes fall the way they should, a loss to Bama in the Championship game shouldn’t keep you out of the playoff. (Insert cliche about controlling your own destiny)

Struggle against any of your unranked opponents along the way and slip up at Auburn. It really is an incredibly simple situation for Georgia this year.

Rest of the Way: South Carolina, at (14) Auburn, Kentucky, at Georgia Tech

You run the table and play Georgia in the SEC championship game. It’s really that simple. The road to the playoff is relatively simple for Jalen Hurts and the Tide. (woah, weirdest feeling of Deja Vu). Bama dropped to Number Two in the initial rankings probably due to their distinct lack of competition up to this point. Their lone ranked opponent up to this point was their season opener against Florida State (RIP ‘Noles). If the Tide can win their last four in any semi-impressive fashion, they have a good chance to leapfrog Georgia in the rankings before the season end.

Lose any of your last four, and lose to Georgia in the SEC Championship.

Impress against Miami and Stanford. Take care of business against Wake and Navy. (PS – Join a conference already. Being independent is so 2005).

A loss to either Miami or Stanford. The luck of the Irish won’t be able to save your playoff chances at that point. (We call that joke “low hanging fruit”).

You have to win the ACC Championship. A win over a (more than likely) undefeated Miami team in the Conference Championship, and I think that cements a one loss Tigers team trip to their third straight playoff appearance.

Struggle against any of your final four opponents. A tough NC State team awaits Dabo and company this Saturday.

Baker Mayfield needs to plant every flag within arms reach on the Sooners journey to a Big 12 Conference Championship. The committee obviously saw the “Cuck in Columbus” as an impressive feat as the Sooners are a spot ahead of the Buckeyes in the initial rankings. This could go a long way if both teams play out the rest of the season as expected.

A less than perfect showing in any of their final four games. Unfortunately, the Sooners road to the playoff isn’t a smooth one. A trip to Stillwater this weekend followed up by a visit from the Horned Frogs means that the Sooner defense will be tested and have to be on their game for 180 straight minutes. They can’t overlook West Virginia either.

Ohio State needs to win out and win the Big Ten Conference championship game. The Big Ten Champion has a very solid chance to make the final four given any slip up by the top 4 teams.

The top five play the way they should the rest of the season. If Wisconsin doesn’t make the conference championship game, the Buckeyes can kiss any chance of the playoff goodbye.

Rest of the Way: at Iowa, (24) Michigan State, Illinois, at Michigan

The Nittany Lions fate is very much the same as the Buckeyes. Penn State will need to win out, paired with the Buckeyes dropping a conference game along the way. Then a win in the Championship Game. All of this plus a struggle by any of the top 5.

If Ohio State wins out. It’s unfortunately really that simple. Saquon and Friends need the most help of any of the Top 10 teams in the initial rankings.

Rest of the Way: at (24) Michigan State, Rutgers, Nebraska, at Maryland

Fear not Andy Dalton. Your Alma Mater isn’t in nearly as bad of shape as the number in front of your name might indicate. If the Horned Frogs are able to win out and secure a Big 12 Title, the argument could be made for TCU to be in the playoff this year.

Rest of the Way: Texas, at (5) Oklahoma, at Texas Tech, Baylor

How We’ll Make It

Consider it an almost certainty that the Badgers won’t see a number less than 4 in front of their name until the final poll of the season. To get there, Wisconsin will need to run the table and HARD. A conference championship, paired with an undefeated record will at least put the Badgers into the conversation.

How We Won’t Make It

Playing the way we have all season. This team has played in too many “exciting” games this season. When you play the 80th ranked schedule in the nation, you can’t beat Purdue by 8. You can’t let Utah State hang around all first half. You just can’t.

Rest of the Way: at Indiana, Iowa, Michigan, at Minnesota

Win. If the Hurricanes can blow through Touchdown Jesus and beat Notre Dame next week, consider that a wrench in the Committee’s discussion. If they are able to win their next two, the conversation of the two semi final games will have to include Miami.

Lose to Notre Dame. Even if they win the other three, a one loss ACC champion not coached by Dabo Swinney will have a hard time convincing the committee.

A lot needs to happen, but in order for the Knights to be in the conversation, they will need annihilate the spread as they have all season. I’m really proud of this team. They have been sooooo fun to watch this season. To say that they have SUPREMELY overachieved this season is an understatement.

The rest of college football plays par for the course.

Rest of the Way: at SMU, Connecticut, at Temple, USF

Well there you have it. I love this time of year. The initial rankings spur sooooo many fun conversations. Agree with me or disagree with me, computers be damned. College Football is life. Talk to you soon!